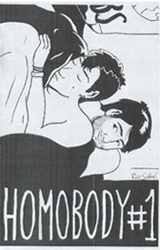 Homobody is a zine series by Rio Safari published in Portland, Oregon, U.S.A.

Homobody is not quite a comic but not quite a literary zine - instead it is a series of captioned drawings, dedicated to exploring the world of queers who don't take drugs and go out to clubs every night but would rather stay home and read a good book. Over time, recurring characters have developed and many formats have been experimented with.

The first issue of Homobody appeared in December 2007. The next issue was released in April of 2008, the third in June of 2008, and the fourth in November of the same year. The fifth issue appeared in October of 2009. The sixth issue was published in June 2010 and featured interviews with comics creator Robert Triptow, and the zine archive project QZAP, as well as contributions by Robert Kirby .

It is a black and white photocopied 1/2 size zine.