Difference between revisions of "Holier Than Thou" 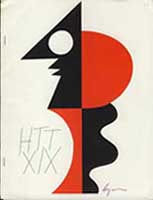 Marty Cantor went on to publish the fanzine No Award.