Difference between revisions of "Hippocampelephantocamelos" 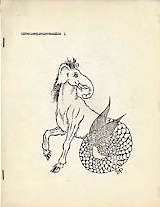 The cover art was a collaboration by four artists, including Joni Stopa (Gallimaufry).