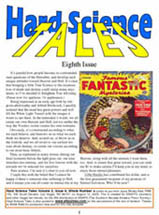 Hard Science Tales was published in Las Vegas, Nevada, U.S.A. in the 2000s. It is an apazine distributed through SMAPS and is also available at eFanzines.com. Issue 1 was published December 24, with issue 2 following in January 25, issue 4 in April 25, and 1ssue 10, the last issue to date, was released February 2006.

Included are Joyce's memoirs, a fan history of the days of ODD fanzine, the fans in St. Louis, Missouri and OSFA (Ozark Science Fiction Association).

Contributions of art work come from Ross Chamberlain (Fangle), and Alan White, with a reprint of a Ray Nelson illustration.

Photographs were contributed by Fred A. Levy Haskell (Rune).

Hard Science Tales was included in the zine library at the exhibition A Non Utopian Kind of Girl, at The Nursury, in London, UK in 2013.