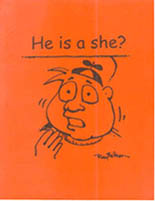 The cover is by Ray Nelson and references the surprise many fans received at the first Worldcon she attended, when they found out the editor of their favorite fanzine, Quandry, as a girl.

Lee later told the editor is was a complete and utter surprise.