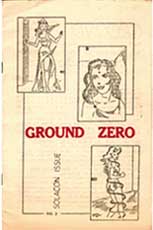 The article "Incorporation Is Too Restrictive" by Sam Moskowitz was reprinted in the fanzine yearbook The Best of Fandom 1958.