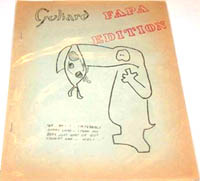 Goliard is a science fiction fanzine by Karen Anderson and Poul Anderson.

Goliard was published beginning in the 1960s in California. U.S.A., and running until the 1970s. The term 'Goliard' refers to a wandering minstrel, itinerant poet, or vagabond scholar in Medieval Europe, famed for the composition of satirical and ribald songs.

The 1963 issue of Goliard features the poems "Ode to a Stuffed Owl" and "Hauteur" by Fredric Brown, reprinted from his first book, Fermented Ink.

The April 1965 issue features the first publishing of Fredric Brown's 5-page biographical piece "It's Only Everything".

Goliard was distributed by the Fantasy Amateur Press Association.

Karen Anderson also published the fanzines Alif, Vorpal Glass, The Zed, and the 1958 one shot Henry Kuttner - A Memorial Symposium.