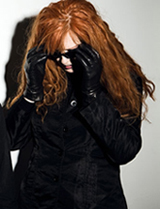 G.B. has directed, and appeared, in a number of films, and was a contributor to the film zine created by Miranda July called Joanie4Jackie. Her movies have all been made on Super 8. The Troublemakers premiered in 1990 and proved influential. Her next film was The Yo-Yo Gang, released in 1992, a 30 minute 'exploitation' movie about girl gangs that has gained cult film status. The film features a number of zine editors, such as Donna Dresch, Deke Nihilson, Bruce LaBruce, and the members of G.B.'s band Fifth Column. Her latest production is "The Lollipop Generation", a feature film that, like her previous movies, stars many zine editors including Jena von Brucker, Vaginal Davis, Joel Gibb, Jen Smith, Johnny Noxzema, Scott Treleaven, Anonymous Boy, Gary Fembot and Stevec Bones.