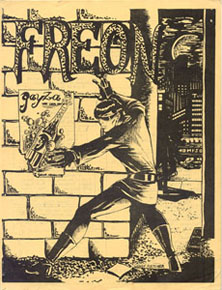 Freon was a fanzine edited by Dwight R. Decker.

Freon was devoted to comics. It was a mimeographed fanzine published in Westerville, Ohio, U.S.A., in the 1960s. Three issues were published, including a supplement to issue 2, which was numbered 2.5. Issue 3 was released in December 1969.