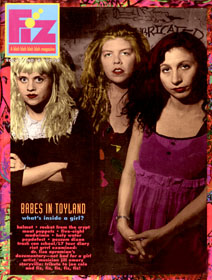 Fiz #4 before the zine relocated to Seattle and bacame Fizz

Fizz was a large bi-monthly fanzine that began as "Fiz" in 1992. Originally founded by Cathy Rundell and Wendy McConnell in Los Angeles, Fiz published 13 issues before the two friends parted and Rundell moved to Seattle, WA in 1994. She then added an extra "z" to the title, became it's sole publisher, and picked up a lot of contributors in her new hometown. Fizz went on to publish 10 more issues from 1994-1998. Both Fiz and Fizz were printed on newsprint with a glossy color cover and some spot color inside. Each issue featured lots of rock and punk band interviews, art, columns and features, often with a humorous angle. One of the highlight's each issue was Rundell's pre-teen daughter Vivien interviewing various musicians, including Billy Idol, the Ramones, Mudhoney and Lemmy from Motorhead (where she asked him if he liked toy trolls).