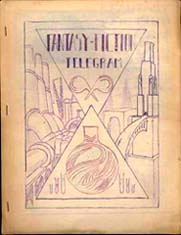 The first issue of Fantasy Fiction Telegram appeared in October 1936. Four issues of this hectographed fanzine were released, the last in January 1937. Later, Baltadonis released the fifth issue, that had been left partially completed at the time, for the Fantasy Amateur Press Association. This was the official organ of the founders of the Philadelphia Science Fiction Society, and the entrance into science fiction fandom of what was to become an influential and prominent group of fans.