Deprecated: Function get_magic_quotes_gpc() is deprecated in /var/www/vhosts/zinewiki.com/httpdocs/zinewiki/includes/WebRequest.php on line 60

Deprecated: The each() function is deprecated. This message will be suppressed on further calls in /var/www/vhosts/zinewiki.com/httpdocs/zinewiki/includes/MagicWord.php on line 883
 Fantasy: The Fantasy Artists Network Magazine - ZineWiki - the history and culture of zines, independent media and the small press. 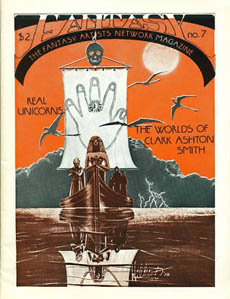 Fantasy: The Fantasy Artists Network Magazine was a fanzine edited by Carol Fisher and Kathy Hammel.

Issue 4, from Winter 1979/1980, featured a cover by Arlin Teeselink, back cover by Gary Raham, with profiles on Patrick Woodroffe, and Joan Hanke Woods, and art work by Dave Archer, John Alexander, Ted Guerin, David Houston, HAML, Janny Wurts, and Jonn Zack. Articles were by John Alexander, among others.

Issue 5, released in 1980, and edited by Kathy Hammel and Kipy Poyser, featured front and back covers by Michael Rodan. Also included was art work by E.H. Dorn, among others.