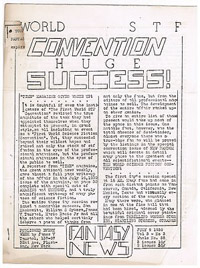 Fantasy-News was first edited by James Taurasi in 1938. Associate editors were Sam Moskowitz (Different), and Mario Racic, Jr. It is reported to have attained the largest circulation of any science fiction fanzine of its time.

In the 1940s it was published by Will Sykora. Associate editors were James Taurasi and Sam Moskowotz. One issue was a split zine with The Miscellany, edited by Gertrude Kuslan and her brother Louis Kuslan.

Letters came from Thomas Gardner, among others.

James Taurasi earlier published Cosmic Tales, and began a fanzine publishing group called Cosmic Publications under which a number of titles were released, including Fantasy-News, The Nucleus, and Different. Taurasi would go on to publish The Science Fiction Yearbook 1957, and Fantasy-Times, which won the first Hugo Award for Best Fanzine in 1955.