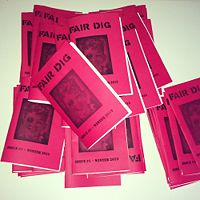 Fair Dig is a perzine by Brodie Foster Hubbard, a writer and musician in Los Angeles, California. The project started in 2012 when Hubbard was working as a transcriber for a reality television series about mixed martial artists. He decided to pursue Brazilian jiu-jitsu as a 33 year old vegan with no real athletic background. His exploration of the martial arts world, coupled with an explanation of his background in Phoenix, Arizona as a punk rock kid, his move to L.A. in 2006 and subsequent struggles in the television industry, and his firsthand experiences with violence, made up the stories of the first issue of Fair Dig, which was published in February 2013 and debuted at that year's L.A. Zine Fest.

The second issue, scheduled to be published summer 2013, will deal with the fallout from the end of Hubbard's martial arts training and his entry into the world of CrossFit, a strength and conditioning program. All issues of the zine are meant to examine the relationships between fitness, DIY culture and activism, traditional gender roles (particularly expectations on cisgender males and so-called "manly" behavior and activities), and veganism, as well as anecdotes from Hubbard's past, and reports from current events in the DIY community.

Review of Fair Dig #1 by Todd Taylor in Razorcake