Difference between revisions of "Fables from the Postmodern Age" 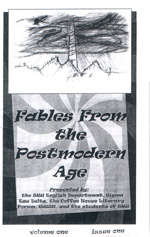 Fables from the Postmodern Age was a literary zine started in Slippery Rock, Pennsylvania in the fall of 2000 by Ehren Helmut Pflugfelder. The zine was started at Slippery Rock University and inspired by a zine from the Art Department which had ceased operation. Under Pflugfelder, the zine produced 3 editions during 2000-2001, featuring writing from the undergraduate and graduate student community.

While the writing in "Fables" was largely from the student population, some additional content was added by the editors. This information was typically political and/or comedic, though at times featured letters from readers. Each issue also featured a note from the current editor on the final page.

After the spring of 2001, Sarah Elizabeth Harris took over as main editor and compiler and the zine continued on for 4 more issues until the fall of 2002.

Fables from the Postmodern Age was initially produced by conning student workers in the copy department into making copies on the English Department's budget, but eventually became "funded" by the department. The first issue had a printing of 120 copies and each edition increased slightly in number. The first issues ran from between 20 to 24 pages and measured 5 3/4" by 7".