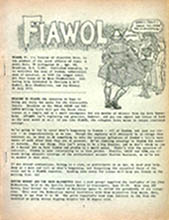 FIAWOL is a science fiction fanzine by Arnie Katz and Joyce Katz.

The initials FIAWOL stand for Fandom Is A Way Of Life, and appropriately FIAWOL was a news zine reporting on events in science fiction fandom. It was published in the 1970s in Brooklyn, New York, U.S.A. It called itself "the fanzine of objective bias".

Contributors of art work included Ross Chamberlain (Fangle). Included in issue 2 is an editorial by Joyce Katz, and the 1971 Egoboo Poll, with the results appearing in the 5th issue.