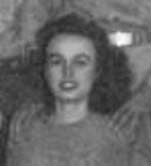 In the 1940s, Eydthe Eyde was well known in science fiction circles as "Tigrina", a name bestowed on her by her friend Forrest J Ackerman. She was a member of the Los Angeles Science Fiction Society, and a contributor to science fiction fanzines. Her name has been written as Eydthe Eide (on the Locus list of authors), and Len Moffat (The Outlander) reports that she gave her name as 'Edyth Eydth' when she joined the Los Angeles Science Fiction Society.