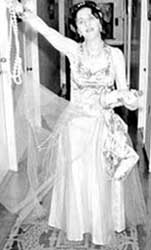 Ethel Lindsay (1921-1996) was a fanzine publisher, writer, and science fiction fan from the UK.

After discovering science fiction fandom in 1954 in a column written by Walt Willis for Nebula, Ethel Lindsay joined the Glascow fan group the Newlands SF club, and immediately began publishing her fanzine Scottishe, which she released from 1954 till 1981, producing 82 issues.

At the same time she was involved in Femizine, which she eventually assumed editorship of. She moved to Surrey in 1955, where she lived until 1978. She joined the Science Fiction Club of London in 1959, and hosted the club in her flat, which she named "Courage House", until 1968. During this period she also released her zine Haverings from 1960 till 1974, producing approximately 50 issues.

As well as these zines, she also released an apazine, Bletherings from 1961 til 1971, first through OMPA and then FAPA. Other collaborations include The Wall, co-edited with Bill Donaho (Habakkuk, Viper), Jim Groves (Vector), and Ron Bennett (Skyrack) for OMPA.

She was the winner of the 1962 TransAtlantic Fan Fund, which enabled her to visit the U.S.A., which she wrote about in The Lindsay Report.

In 1973, Ethel Lindsay received the Doc Weir Award for her contributions to fandom.