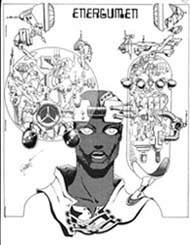 Energumen is a science fiction fanzine produced by Mike Glicksohn and Susan Wood.

Published in Toronto, Ontario, Canada, the first issue appeared in 1970. Sixteen issues were released, the final issue appearing in September 1981. Attention was paid to the layout, presentation and art work for the fanzine as well as the excellent writing, which made it exceptional.

The final issue, #16, was a special "11th Anniversary Issue" released by Mike Glicksohn in 1981 as a memorial to Susan Wood, who died in 1980 while they had been planning the issue.