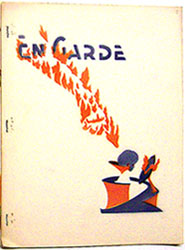 Published in Battle Creek, Michigan, U.S.A. during the 1940s, En Garde was an APA zine distributed by the Fantasy Amateur Press Association. At least 10 issues were released, with issue 10 appearing in June 1944.

Each issue featured air-brushed covers, each created individually, one at a time, by Jack Weidenbeck and Al Ashley, and assisted by Abby Lu Ashley, and Earl Perry.

Writing was by Abby Lu Ashley, Al Ashley, and Jack Weidenbeck, who reviewed the artwork in zines in his column "The Fapictorial Review".

Interior artwork was by Al Ashley, among others.