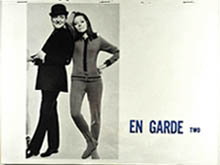 En Garde was a fanzine by Richard Schultz, published in the U.S.A.

En Garde was dedicated to the television series The Avengers, and the principal actors Patrick McNee and Diana Rigg. There were 7 and a half issues released, with the sixth issue being 5.5. The last issue, #7, is dedicated to the televison series The Prisoner. It was published in the 1960s, the first issue appearing in 1967. Along with Schultz, various co-editors have been credited, including Mandi Schultz and Gary Crowdus.