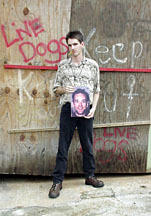 Emerson Dameron (born June 16, 1978) is a zinester and columnist. He lives in Los Angeles.

Emerson Dameron was born in June of 1978 in Nebo, NC. Dameron made his first zine at the age of seven, although he did not know the term.

His early favorite was Crank zine, written by Jeff Koyen.

Dameron's first published works came in 1996-97, in the NC zines C and gANK, followed by his first professional writing appearing in 1999, for the Athens, GA alt-weekly Flagpole.

From 2001-06, he contributed reviews to Zine World: A Reader's Guide to the Underground Press. He published three issues of Wherewithal from 2004-06. In February 2006, Dameron co-founded the Chicago Underground Library. In May 2006, he performed as part of the Perpetual Motion Roadshow.