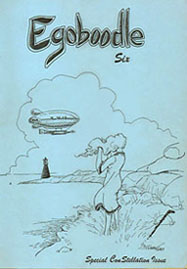 Egoboodle is a science fiction fanzine by Linda Blanchard.

Published in the U.S.A. in the 1980's, Egobbodle began as a perzine and became a genzine by issue 5, released in July 1983. Previsouly it has been named Some Luck, and It Figures. After issue 6, the fanzine was renamed Six Point Five, and then issue 7 was called Moving Paper Fantasy, released January 1984.

Contributors of writing included Steve B. Bieler, and Tatiana Keller.

Contributors of art work included Brad Foster, and Stu Shiffman (Raffles), among others.

In 1984, Linda Blanchard also co-edited the fanzine Climbing On Air, with Rich Brown.

Linda Blanchard is one of several SF fans who appear in the fan-fiction story, "Visit to a Small Factory" by Marc Ortlieb, which originally appeared in Holier Than Thou #25, and then appeared in the 'Best of 1987' compilation Fanthology '87.