By Anto Loserdom (of Loserdom), originally published in Loserdom 13, October 2005. Re-published with permission from the author.

Zines have existed in Ireland for twenty-eight years. Unprofessional, home-made small circulation magazines with features on local music scenes, documentaries from daily life, art and political commentary that are out of bounds for mainstream outlets such as national media institutions and the transnational cultural industries. Investigation into early Irish fanzines offers a rich and inspirational tradition of attempts to record and document lived realities, histories and viewpoints that otherwise most likely would have been ignored.

The first Irish punk fanzine was published in March 1977 by Stephen Rapid, a member of local band the Radiators (From Space). Raw Power #1 was eleven A4 single-sided photocopied stapled pages, handwritten and typed, and featured a Radiators interview, record reviews, a feature on the new band Revolver, local band rumours and news, as well as tips for bands starting off with original material. From the outset the tone was encouraging of others getting involved: “And most of all don’t sit around doing nothing. If you want to see these bands let them know, if you’re in school organize a dance, get them to play. Form your own bands if you don’t like any around at the moment. Write your own fanzine so that other people will know that there are others around like them. Don’t follow fashions start your own. But do something positive NOW.” (Intro, Raw Power#1).

Raw Power lasted two issues, the second issue containing the first ever interview with Derry band The Undertones. The idea had been sparked though; Heat was the next Irish fanzine in July ’77.

“I met Jude Carr, he was going to a lot of these gigs as well and it literally came to a situation where we decided that … you know the idea that you could just get up on stage and do it – We couldn’t play, we couldn’t sing, we couldn’t write, but the one thing we could do is bring out a fanzine about the bands that we were into…” (Peter Nasty interviewed by Boz). Heat’s creators Pete Nasty (Pete Price) and Ray Gunne (Jude Carr), had a more graphics/print background, and were more influenced by the New York fanzine Punk Magazine [first punk fanzine], than the very basic photocopy-staple job of English fanzine Sniffin' Glue [first British punk fanzine]. The text was handwritten while pages were well designed, laid-out and printed with a colour cover. The subject matter covered new wave/punk band interviews, articles, reviews and, later, comic strips and films. Having secured advertising funding and distribution from Better Badges in England (button badge producers), the magazines circulation was increasing by 200 each issue; jumping to 2000 copies when they tried to secure proper nationwide distribution through Easons newsagents. By Heat Vol.2 issue 2 [no.11], the magazine was gathering momentum, but a published article “McGuiness is good for U2” lead to the end of the road. The article alleged that U2 manager Paul McGuiness had succeeded in getting a band pulled from a support slot at a gig, for U2 instead. McGuiness threatened to sue Heat unless the article was pulled but a batch had already gone to Easons. McGuiness subsequently found out and sued the magazine, ensuring its closure and place in Irish music folklore’s history, although a benefit gig for Heat managed to cover the costs. Heat’s two writers later started another fanzine called Black & White, this time laying out contributions from bands rather than featuring their own articles, it didn’t receive quite as a good a reaction though, and only lasted for 3 issues. 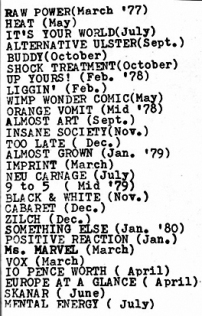 Imprint, another fanzine, started in 1979 and was edited by Barbara Fitz. In its eleventh issue the zine featured the Zerox Irish Fanzine Directory, charting names and dates of the releases of Irish fanzines up to that time (above). Other features include an interview and tour around town with Tom Robinson of Sector 27, as well as interviews and features on Dexys Midnight Runners, Broken Doll, Modern Disgrace and other local goings on! The Zerox Irish Fanzines Directory lists many zines whose traces have completely disappeared now.

Vox, which started in March ’80, became a significant cultural publication of the era combining punk, electronic and progressive music, underground poets, performance artists and fringe entities. Flicking through its pages is like looking through a directory of all things new wave and underground covering that period of time, with so many topics and features that it is hard to attempt a summary.

Dave Clifford, its editor, was himself a printer and this is reflected in its sophisticated, clean layouts, printed pages and two-colour cover as well as high quality writing and journalism. Although with such high aesthetics it may have bordered towards being a magazine, PA of A New Clear Threat zine and Paranoid Visions (band) explains: “In reality it was a fanzine, in real terms Dave Clifford was a fan of punk bands, he did a magazine for punk bands as a man into punk doing it himself, nobody censoring it, editing it, he interviewed totally outrageous bands .I remember reading an interview with a band called Of Xerox. This was when I was 13 “Christ these are popstars”, reading about them, looking at photographs, they’re the real thing. I kept seeing the bass player on the train on my way to school, I though she was the coolest in the world. They’d played about 3 gigs, they weren’t a real band but he was writing about them and that made it really special. Another punk band called The Pretty – one of the first Irish punk bands – first real serious nasty shower. He had an article on them which was very insightful. That would have been influential on me. Once I realised that The Pretty were no better than me or anything that I could have done, Of Xerox were just 4/5 years older than me, she was on her way to school aswell. Once you realise that it takes the mystery out of it, not everybody is the Sex Pistols or the Damned, anybody can be doing this…”. Vox lasted for at least 14 issues until 1983.

This is an excerpt from a thesis written by Anto Loserdom called : ‘A History of Irish Zines: Alternate Voices To The Cultural Industries’. The theme of Early Irish Fanzines is still being covered in Loserdom with interviews of early Irish zine writers such as PA of A New Clear Threat and Angus of Smegma fanzine.