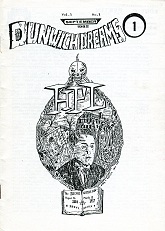 It was distributed through The Esoteric Order of Dagon mailings.

The first issue appeared in September 1982, and included articles, poetry and art, all by Bertin. Eight issues in total appeared, with the final issue released in June 1984.

In 2008 Eddy C. Bertin was featured in the small press publication, Cyaegha, with a first issue entirely devoted to his work, and featuring the essay "My European Mythos", as well as poems by Bertin, an interview, and a bibliography and glossary.