Difference between revisions of "Dragonfields" 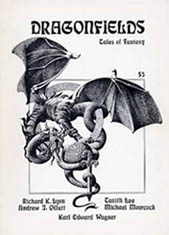 Dragonfields was a fantasy fanzine by Charles de Lint and Charles Saunders.