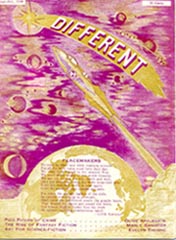 Different, subtitled "The Voice of the Cultural Renaissance", was launched in the mid-1940s and was devoted to poetry, but also published fiction and articles. Writing included both "fantastical" and more mainstream poetry. It was a 32-page publication released in Rogers, Arkansas, U.S.A. up until the Autumn issue of 1951 (Vol 7 #3). It then reemerged in a 40-page digest-sized format in Spring 1953 published in Floral Park, Long Island, New York, U.S.A. It ended with the Winter 1954 issue (Vol 8 #4), although annuals appeared for another three years. Stanton A. Coblentz (editor of Wings) was the Fantasy Editor of Different.

"Different was founded as a sincere attempt to use whatever influence we might attain to salvage some last remnants of American culture and to restore within the limits of that influence some of the lost glory of the poetry of earth. For poetry, as we have said before, is the atomic energy of the soul, which exploded against the battlements of hate and terror will level them in the dust of oblivion and leave the liberated soul free in an expanding universe."

The September/October issue of 1948 (#4.4) included a guest editorial by the U.S. Rocket Society's R. L. Farnsworth called "Stairway to the Stars", and Farnsworth also contributed the article "Dusk Is Falling" to the March/April 1950 issue (#6.1).

Manly Banister, editor of The Nekromantikon, contributed an article, "The Rise of Fantasy Fiction", to the September/October 1950 issue (#6.4).

Lilith Lorraine also published the poetry magazines The Raven, Challenge, and Flame, and the science fiction publication The Avalonian.