Difference between revisions of "Daphne Buckmaster" 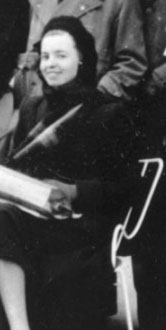 Daphne Buckmaster is a fanzine editor originally from London, England, and later Scotland.

Daphne Buckmaster began attending science fiction conventions in the 1940s when she was known as Daphne Bradley. She is noted being the only woman at the convention at the White Horse Tavern in 1948. After her marriage to husband Ron Buckmaster, she was a member of the Woolwich Science Fiction and Vargo Statten Appreciation Society in 1954.

She began publishing her fanzine Esprit in 1954: at first it was intended for circulation in the Offtrails Magazine Publishers Association (OMPA) but with the 13th issue in 1960 she decided to make it generally available. She stated her intentions were:

"...an attempt at the sort of fanzine which I have long waited to see but have never come across - a magazine in which observations, experiences and ideas can be exchanged." Five of the post OMPA issues were released, the last in 1961.

In 1960 she released the fanzine Hobo, and also began publishing Random, of which three issues appeared, the first in 1960 and the second and third in 1961.

In 1962 she published the one shot fanzine Rackhamart for the Apazine Offtrails Magazine Publishers Association.