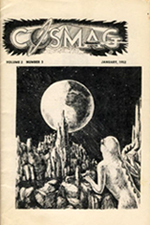 Cosmag was a science fiction fanzine by Ian T. Macauley.

Cosmag was published in Atlanta, Georgia, U.S.A., in the 1950s. The Art Director was Jerry Burge and Associate Editors were Carson Jacks and John Rose. It was a product of the Atlanta Science Fiction Organization. The first issue was released in March, 1951. The subtitle on that first issue was "a fanzine for fen" and it included stories, articles, and drawings on sf and, in later issues, a fanzine review column.

Cosmag was a split zine, combined with Science Fiction Digest, that appeared upside down and backwards on the reverse.

Jerry Burge later went on to co-edit Si-Fan, and Ian Macauley went on to edit ASPO.