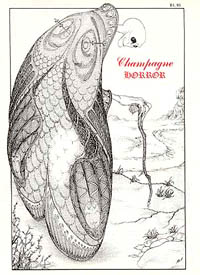 Champagne Horror is a small press publication by Cathy Buburuz.

Only one issue of Champagne Horror was released in Regina Saskatchewan, Canada, in 1990. It featured fiction, poetry, illustrations, demented nursery rhymes, and a cartoon, all devoted to horror, weird fiction, and the supernatural.

Photography is by Justice Howard.