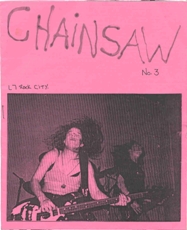 Chainsaw was a zine published by Donna Dresch out of Olympia Washington that later developed into a recording label.

Chainsaw existed from the late 1980's to the early 1990's during which time four issues were released. Musicians and writers featured in Chainsaw include Lois Maffeo, Juliana Lueking, G.B. Jones, Larrybob of Holy Titclamps, Jena von Brucker, editor of Jane Gets A Divorce, Candice Peterson, and the bands Holy Sister of the Gaga Dada, and Vomit Launch. Chainsaw was an early queercore zine and was also influential for the emerging Riot Grrrl scene, since its primary focus was on women in music.

The fourth and last issue of Chainsaw was produced by Donna Dresch as a cassette tape, which heralded its inception as a recording label. "In 1991...Chainsaw developed from a zine into a record label. This began simply enough when she made a compilation cassette of her favourite bands and started to sell these while on tour with Fifth Column," relates Amy Spencer in the book DIY: The Rise Of Lo-Fi Culture. Since then, Chainsaw has released recordings by bands such as Sleater Kinney, Excuse 17, Heavens To Betsy, The Need, Longstocking, The Third Sex, Tracie + The Plastics, and Donna's own band Team Dresch among many others. cell phone number lookup