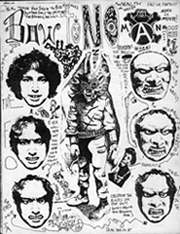 Bow To No Man was a zine from Scottsdale, Arizona, U.S.A.

The editors of this zine are listed as Brian, Bill, Todd, Fearn, John, Bob, Chad and Jon. It emerged from the hardcore punk skateboarding scene surrounding the band J.F.A. (Jodie Foster's Army) in the 1980's.

Bow To No Man is a cut and paste zine, and includes an interview with skateboarder and musician John Haas, veteran of the bands Blatent Locals, Plaid Daggers, Scared Straight, N.R.A., Burnt Toast, Violent Dumbfucks and Klüged. There are lots of photos of skaters doing tricks, such as "Brian pulling a Max B-side-A", "Staab laying back a high L.B.A.", "Sam the Ez rippin one of the hottest inverts in Phoenix", "Eric R. blazing Shane's turf", "JPY inverted at Cady's ramp", and "Wild Bill ripping up the infamous Stupors". There are also skateboarding stories, and a guide to skateboarding slang: Bow To No Man lets its readers know that to "Smoke" is "to totally blaze skating wise", to "Eat" is "to slam heavily; an almost purposeless blunder if you ride a Cady skate" and to "Jel" is "to totally disintegrate in mental follow through; but not on a Cady skate". There are also photos of J.F.A. in performance and on tour. As well the zine features collages, poems, comics, illustrations, and an article on punks on television.