Difference between revisions of "Borealis" 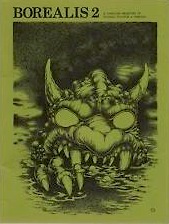 Included is the editorial "One Solitude" by John Bell, and the articles included "The Hell-Bound Bus" by Spider Robinson, and "Farmer of the Apes" by Charles Saunders (Dragonfields, Stardock), writing on Philip Jose Farmer's Tarzan related books; and John Bell writing on James deMille, author of 'A Strange Manuscript Found in a Copper Cylinder'.