Difference between revisions of "Black Lite" 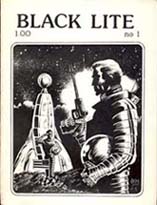 Black Lite is a fantasy, science fiction and horror fanzine by John DiPrete.

Black Lite was published in Cranston, Rhode Island, U.S.A. The first issue appeared in August 1976 and the second following in October of the same year. Issue 3 was released in March 1977 and the last double issue of 4 and 5 in January 1978.