Black Lesbian President is a fanzine from Cardiff, South Wales in the UK by Alex Leech. It has focused on a mix of band interviews, personal writing, reviews and various other music-related articles. The name paraphrases a remark made by Henry Rollins about Condoleezza Rice. It is NOT associated with any Morrissey lyrics. 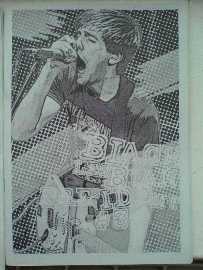 After being inspired by other local zines Artcore and Mad Monks, Alex co-wrote a short-lived scrappy cut'n'paste fanzine called Zineophobia in 2004 that ran for three issues. The first issue of Black Lesbian President was written during the summer of 2006, first available that August. Subsequent issues have been released approximately every six months since then, with the fourth due for release imminently.

1 - Death Is Not Glamorous, Shook Ones, This Bike Is A Pipe Bomb, The King Blues and Ruin You. Plus Leatherface discussion, Heavens To Betsy profile, reviews etc.