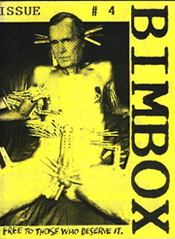 Bimbox was a zine published in Toronto, Ontario, Canada, by Johnny Noxzema and Rex Boy.

Five issues of Bimbox was released in the 1990's. It was never sold through distributors or stores: the slogan of the zine was "Free to those who deserve it".

Dennis Cooper, in his 1992 article on Queer Zines in The Village Voice, quotes from Bimbox:

"You are entering a gay and lesbian-free zone...Effective immediately, BIMBOX is at war against lesbians and gays. A war in which modern queer boys and girls are united against the prehistoric thinking and demented self-serving politics of the above-mentioned scum.

"BIMBOX hereby renounces its past use of the term lesbian and gay in a positive manner. This is civil war against the ultimate evil and consequently we must identify us and them in no uncertain terms..."

"So, dear lesbian womon (sic) or gay man to whom perhaps BIMBOX has been inappropriately posted...prepare to pay dearly for the way you and your kind have fucked things up."

Johnny Noxzema and Rex Boy were also two of the five editors of Double Bill.