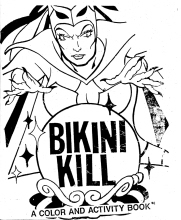 Bikini Kill was a zine published by members of the band Bikini Kill in the early 1990's.

The phrase had been coined by Lois Maffeo and editor Tobi Vail asked if she could use it. The articles were primarily by singer Kathleen Hanna and drummer Tobi Vail. Articles centered around punk rock, girls in bands, political and feminist issues and Riot Grrrl. As well, extensive scene reports on Olympia, Washington and San Francisco are included, with news about bands such as Nation of Ulysses, Bratmobile, Kicking Giant, Heavens to Betsy, Suture, Nirvana, Fugazi, Unwound and the International Pop Underground festival. Issue two included a detailed interview with the band Tribe 8 as well as a couple of letters, a remembrance of Paula of the Pandoras, and articles on Fat Oppression and the coolness of being dorky.