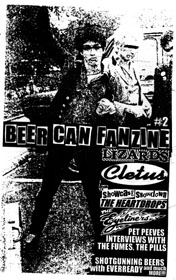 Beer Can Fanzine was published out of Portland, OR by Jesse Kimball in the mid 1990's. The zine's main focus was on beer and punk music. All the interviews featured at least a question or two about beer drinking and the artwork was mostly cut and paste.

Issue #1: Music reviews, history of the beer can, and interviews with Moral Crux, the Silverkings, Mullens, Setalliters, Secret Lovers, Hippriests, and Loudmouths.

Issue #2: History of the beer can part 2, a how to guide to shotgunning beer, zine and record reviews, and interviews with the Eyeliners, the Lizards, the Showcase Showdown, Cletus, the Fumes, the Pills, and the Heartdrops.