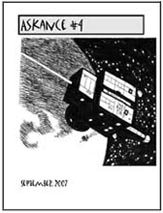 Askance is the bimonthly fanzine edited and published by John Purcell since March, 2007.

It is available on-line in PDF format at efanzines.com, but is also available in a printed version by request. Printed versions are published in Texas, U.S.A.

The cartoon "Figby" is contributed by Bill Fischer.

With the March, 2010 issue (the third anniversary issue), Askance began a quarterly publication schedule. Unfortunately, there was not a December, 2010 issue due to computer-related problems, but the zine resumed its schedule in March, 2011.

John Purcell previously published the fanzines This House, And furthermore..., and In A Prior Lifetime.