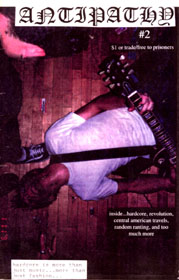 Antipathy was a half-sized anarchist-leaning perzine published out of Eugene, Oregon, U.S.A., in the mid-'90s. Editor Mike included a mix of personal stories, politics and music in each issue. Every issue featured stories of Mike's travels, which included train hopping and traveling in Latin America. Other topics addressed were the editor's experiences with prostitution, rants on punk, revolution, liberation, sex, death and much more. Each issue was generally quite thick and packed with entertaining writing.

Antipathy was featured in Volume Three, Five and Six of Zine Yearbook.