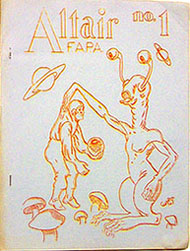 The first issue appeared in February 1950. The cover art for this issue was by Henry Chabot, a member of The Fantasy Artisans Club, along with Ed Cox. The first issue also included the article "Lovecraft Revisited" by Dave Thomas. Other contributors included Art Rapp (Spacewarp), and Harry Warner, Jr. (Horizons).

It may have been in his FAPAzine that the origin of the fannish tradition of "Ed Cox Doodle Here" began. As written by Dave Lock in the September 2008 Time and Again #5, which may or may not be fanfiction, Ed Cox reportedly told Dave Locke over the phone, "...in my FAPAzine, I did't have any illustration to put in. So I just left blank spaces here and there, and told everyone they could fill them in as they pleased....As a result of that Roy Tackett started leaving blank spaces in his own zine but he would put the words "Ed Cox Doodle More" inside the blank space. For some reason or other, other fans started doing it."