All is full of plastic 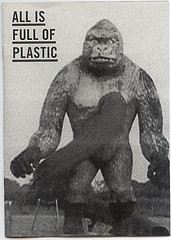 All is full of plastic by Pere Saguer

All is full of plastic is a photo zine from Girona and Barcelona made by Pere Saguer. The photos are worn, poorly framed, and low contrast, leaving you with many unknowns about the photo. Printed in black and white on a A4 green paper, 80gr.

Text by Teknad on his blogg: All is Full of Plastic is a new photozine by Pere Saguer. It’s printed on light, grey paper and features beautiful digital photographies that are treated with a special pixelated texture which is not unpleasant, as it was the contemporary equivalent of the old snapshot’s grain. On the cover appears a slide which goes out from a giant monkey sculpture’s chest, and a sentence that could be as well a parody of a Bjork song as the description of a world saturated with cheap plastic. Inside, each image is accompanied by a sentence that’s related (or not) to it, and that sends a message that can be ambiguous (Tom’s father plays with him at night – a reference to Tom's Fanzine by Robert Roura, maybe?), pessimistic ("I used my last opportunity"), evocative ("Burning snowman") or obscene ("I like your dirty mind", with the image of some mountains). The only clue about the image’s origin are signs or texts in Spanish or Catalan on some of them. At the same time, the combination between text and image produces a result that goes beyond the addition of its parts, and that sometimes restricts their meaning, or else it takes us by mysterious ways, playing confusion.

Edition is limited to 15 copies.