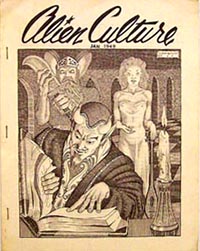 Alien Culture was published in Rockford, Illinois, U.S.A. and was first released in January 1949. Four issues appeared that year, the second issue appearing in April, the third in July, and the last in October. It described itself as "An amateur publication for fans of the field of fantastic literature inclusive of fantasy, science-fiction and weird fiction."

Volume 1, No.2 featured an essay on the short stories of Clark Ashton Smith by Eldred Smith, and the third issue featured a Smith bibliography.

Illustrations were contributed by John Cockroft and William Rotsler.