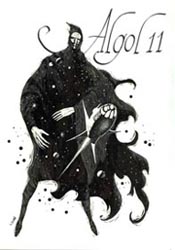 Algo was a science fiction fanzine by Andrew Porter.

Released in New York, U.S.A. in 1963 Algol grew from a two page fanzine created on a spirit duplicator to having offset covers, and then mimeographed pages, till it eventually became a printed publication with colour covers with a circulation of 7,000. The name of the fanzine was later to changed to Starship and at this time it became a pro zine.

Algo won the Hugo Award for Best Fanzine in 1974. Later the category for 'Best Fanzine' would be redefined so that semi-pro zines such as the later Algol/Starship with professional printing and circulations over 1,000, would have their own category, 'Best Semiprozines'. Whatever it ended up as, Algol did start out as a real fanzine.