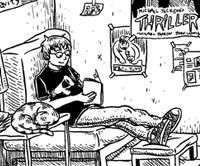 Alan J. Lastufka (born May 1983) is a zinester and columnist best known for his project, the Fall of Autumn, launched October 1, 2005. Lastufka started the Zinester Podcasts in 2005 and created ZineWiki in 2006.

Alan Lastufka was born in 1983 in Milwaukee, Wisconsin. When Lastufka was fourteen years old, he left his father, brother, sister and home in Milwaukee to live with his mother in Joliet, Illinois, near Chicago.

Contributions to other Zines