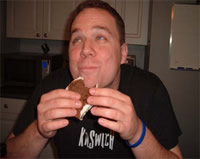 Aaron Cynic eating a lamb cake at his apartment in Chicago, 2006

Aaron Cynic is a zine writer and project organizer in Chicago, IL. His zines include Diatribe Zine and Vices Make My Life More Interesting. He has contributed to Sanitary and Ship, Tail Spins, Clamor, the Fall of Autumn Quarterly and Zine Guide. He is the founder of Diatribe Media and a staff member of Fall of Autumn.

Aaron Cynic was born in 1979. He grew up in Tinley Park, IL, where he attended parochial school for 12 years. He received his bachelors degree in 2003 from Columbia College of Chicago. In 2005, Cynic moved from the south suburbs into the city of Chicago.

Aaron created his first zine, Meat and Potatoes around 1995 after reading a zine called Straw Horse Spiral and laughing for at least a full hour. Unfortunately, Meat and Potatoes never saw the light of day, and not even the original copy exists. A few years later, Aaron helped to create United Productions Issue 1, a zine that was sold for one dollar at a local punk show to help promote a demo tape of several local bands and failed record label, United Productions. He stopped attempting to create zines (and just continued reading them) after that to focus on his band, The Cynix.

Aaron reinvolved himself in creating zines near his graduation from college, when he created Diatribe in order to fulfill a college project. Since his band The Cynix broke up and he enjoyed writing rants about politics, he decided to keep Diatribe going and subsequently founded Diatribe Media in order to promote his own writing projects as well as projects of friends. He enjoyed a brief stint contributing to Zine Guide and Tail Spins as well as assisting in the foundation of and organizing local zine readings with SPEC Chicago. Since then he has continued to organize events with Kate Sandler and helped create Sanitary and Ship, a compilation zine featuring various Chicago writers. His recent (and yet to be published) zines include Raconteur (grown out of Vices Make My Life More Interesting) and You Are Here - This Is Not. He recently began podcasting with fellow zinester Grant Schreiber in a semi-regular podcast called "Fate of the Union." Aaron also hosts a weekly internet radio show called "Juvenile Delinquent" Sunday nights at 8pm CST on Punk and Beans Radio

Aaron also keeps a blog called As Above, So Below. You can find him at various punk and hardcore shows in Chicago, Wanderers shows, bottle rocket wars, or big zine events like the Allied Media Conference. Should you feel any reason to, you're more than encouraged to contact him at aaroncynic*at*gmail*dot*com