Difference between revisions of "A Bas" 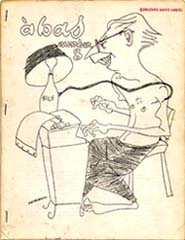 A Bas was a science fiction fanzine published by Boyd Raeburn.

Published in Toronto, Ontario, Canada, A Bas began as the organ of "The Derelicts", as the members of The Toronto SF Society called themselves. Later, Raeburn and friends redefined themselves as "Derelict Insurgents", or "Toronto Insurgents". It was originally intended as a one-issue-only fanzine to be sent free to all subscribers of Canadian Fandom. The first issue was put together in one night - starting at 3 PM on Saturday, January 23, 1954 and ending at 5AM on Sunday - by Raeburn and friends Albert Lastovica, Howard Lyons, Ron Kidder, Gerald Steward and Kenneth G. Hall. The rest of the run of A Bas was edited by Raeburn on his own. 11 issues were released, the last issue appearing February, 1959.

Included in A Bas were little playlets called "Derelicti Derogations" created by the editor from actual overheard conversations of members of The Derelicts with fans.

Artists contributing to A Bas include Pat Patterson, who did four of the front covers for this fanzine (issues 7, 8, 9 and 10).

A Bas included the last fanzine contribution made by Walt Liebscher, and the parody.of My Fair Lady, called My Fair Femmefan, originally credited to Carl Brandon, a hoax fan created by Terry Carr.

After A Bas ceased publication, Boyd Raeburn went on to release Queebshots with Norm Clarke and Georgina Ellis, the editors of Honque and Descant.