From ZineWiki
(Redirected from D90)
Jump to navigationJump to search 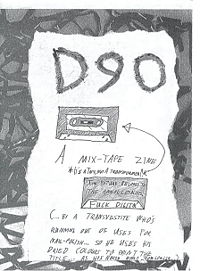 D90 : a mix-tape zine (2008-) is an anonymously produced perzine about mix-tapes, published in Melbourne. The zinester describes himself as “a transvestite who’s running out of uses for nail-polish… so he uses his dried colours to paint the title… as his naked nails grow longer…”.

After two reasonably well-received issues, the creator of D90 has gone all full of himself, and has thusly decided to make more of an event of the release of his latest tome of whiney, anachronistic vitriol and nerdy music love.

So, come down to the blessed Sticky Institute in Campbell Arcade between 5-7pm on Friday 5 May to...

- Listen to yet another of the creator's mindlessly self-indulgent mix-tapes (up for the taking to anyone who agrees to write an invigorating response to it for issue #4), - Partake in a fierce discussion on the ethics of unauthorised analogue compiling (complete with references to Canadian creative commons regulations and talk of a stupidly legal project to test the real-world feasibility of the respective legislation),

- Add to the madness that is the annotated mix-wall (destined to inspire derision, fail dramatically, and also end up in issue #4),

- Nosh on dubiously mix-tape-themed food (as decided on by the creator in a fit of senseless dictatorial fury), &

- Add your name to the "Hat of Fun" (TM), where-upon the conclusion of the event, names will be picked out at random to assign mix-buddies! (The Hat never lies - it WILL be fun... and, hopefully, catchier than the bubonic plague)

As an added aside, there will also be piles of copies said zine - the biggest and most colourful so far! - to take home with you, as well as some smaller piles of the creator's weekly zine, 'Dilettantes & Heartless Manipulators', and to celebrate will be sitting in a corner and pouting whilst the rest of the room has loads of fun. Hah."